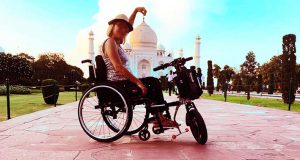 India Golden Triangle accessible: A trip designed for people with disability in the Indian golden triangle accessible: Delhi, Agra and Jaipur.
Although the journey requires a good spirit of adaptation for some long transfers by car, it will pay off with its charm those who decide to undertake it.
A unique and unexpected journey through the wonders of North India designed to make it as accessible as possible for people with motor disabilities.

Departure from your Country with scheduled flights. Meals and overnight on board.

Arrival in Delhi.
Handling of entry and customs formalities. Meeting with the local assistant and transfer to the hotel. Rooms immediately available. After breakfast, the city tour begins. The first settlement in the Delhi area dates back to the 9th century, with the mythical city of Indraprashtra, capital of the Pandavas, the Hindu heroes whose deeds are found in the epic poem of the Mahabharata. A period of feudalism followed with the rule of the rajaput, Muslim warrior aristocrats. Over the centuries, seven cities were built which suffered several raids from the surrounding territories. From 1526 Humayun and his able successors extended the empire beyond the borders of Delhi, giving rise to an attempt to reunify the country. The eighth city was built when Emperor Shah Jahan moved the capital from Agra to Delhi. The construction of the main monuments of the city dates back to this period. With the arrival of the English Calcutta was chosen as the capital and only in 1911 was the capital brought back to Delhi. On February 9, 1931, the British viceroy inaugurated New Delhi on a project by Sir Edwin Lutyens and Herbert Baker. The new city included the government buildings, the building housing the National Museum, two churches and most of the residences that are part of the representation area. In 1947 Delhi became the capital of Independent India. In the afternoon visit to the new city: the central districts where the Government Buildings are located; the Gate of India, an arch erected in memory of the First World War, the Palace of Parliament, the Qutab Minar, one of the highest stone towers in India, was begun in 1199 by Qutab ud-din and completed by his successors of him. In the late afternoon if time permits, visit a Sikh temple. Dinner and overnight. 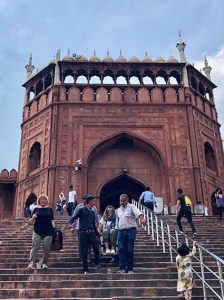 Breakfast. . In the morning visit the old city (Shahajahanabad), built by the powerful Mughal emperor, Shah Jahan, was once surrounded by a red sandstone wall with fourteen access gates. Fascinating and picturesque maze of alleys, it is divided into two parts by the via “dell’Argento”, a colorful and lively succession of shops and bazaars. In the same area you can visit the Jama Masjid, one of the largest mosques in the world, built in 1650, has a more severe structure than the buildings for civilian use wanted by the emperor. Free afternoon. Overnight.

Breakfast and departure for Agra, visit to the Taj Mahal (closed on Fridays) is one of the seven wonders in the world that stands in the middle of a lush garden. Its beauty transcends all description. Built by the Mughal Emperor Shahjehan in 1631 in memory of his wife Mumtaz Mahal, who died during the birth of her 14th child after 17 years of marriage. To erect the monument, precious stones of all kinds, pearls, corals were collected and 20,000 of the best craftsmen were called from all over the realm, who took 22 years to complete this masterpiece. Continue to the Red Fort, a large building overlooking the Yamuna River, begun by Emperor Akbar and then enlarged by subsequent emperors, where you can visit the hall of public audiences and that of private audiences. Not all monuments preserved inside are open to visitors. Return to hotel, dinner and overnight.

Breakfast and departure for Jaipur, along the way stop and visit Fathepur sikri, the remains of the ancient city built by the Afghan ruler Sikander Lodi. The imposing funerary monument of Emperor Akbar was built on the site, surrounded by a 75-hectare garden, in Indo-Islamic style, erected according to distinctive features that were intended to symbolize the convictions of religious tolerance of this great ruler. Inside the complex are the ruins of the Baradi Palace, built in 1495 100 meters north of the foundation stone of the ancient city, expropriated in 1623 by Jehangir who erected his mother’s tomb there. Arrival in Jaipur and accommodation in the hotel.

After breakfast go visit the Amber Fort.
This is one of the most fascinating of the Indian forts which includes the Palace of Mirrors, the Hall of Public Audience and the splendid gardens, which give a glimpse of the majesty of yesteryear. Following the afternoon visit of City Palace, with its numerous courtyards and gardens, offers a wonderful contrast to its many sumptuous structures. Additionally, past the Hawa Mahal to visit the Jantar Mantar – the Observatory which incorporates multiple buildings of unique geometric shapes, each with a specialized function for astronomical measurement.
Transfer to Delhi, hotel accommodation until overnight transfer to the airport.

Transfer in time to the airport.
End of services

N.B. Some visits may be partially accessible

The itinerary inside India Golden Triangle accessible may be subject to changes based on weather and road conditions. The check in in the hotels is usually at 14.00 and check out at 12.00
To access some temples it is required to remove shoes and socks. Tips are not mandatory but are recommended for drivers and guides.

To participate in this trip you need an Indian visa (e – visa) according your Country regulations, a passport valid for 6 months with at least two free pages, a passport photo size 5 x 5 and a duly completed and signed online form (https://indianvisaonline.gov.in/evisa/tvoa.html).

Pre-assignment of seats on flights is not guaranteed, it depends on the rules imposed by the airline and / or the booking class.
It is carried out by us after the airline tickets have been issued, only if permitted and only if free of charge by the company.
Otherwise, the customer can pay for it, if possible, directly on the airline’s website, or during the online check-in phase.

The itinerary may be subject to changes based on weather and road conditions, internal flight operations, the opening / closing days of the sites visited.
Please note:
This quotation does not constitute a contractual proposal and is subject to reconfirmation at the time of blocking the space based on the actual availability of hotel and flight services and the availability of the booking classes.
Details about general terms and conditions are provided on request.

Acceptance of this estimate will be followed by sending the practical account statement with indication of the terms of payment of the deposit and of the balance due, terms to be understood from now on as binding and irrevocable unless otherwise agreed in writing between the parties. Please note that in the event of non-compliance with the payment conditions, a notice of termination of the contract will be sent pursuant to art. 7, general conditions of contract with charge of any accrued penalties.

NOTES: Supplements for local holidays, Christmas and New Year’s dinners and high season (from 20 December to 10 January), when mandatory, will be communicated at the time of booking

Hotels mentioned or if not available others of the same category on a standard double room basis (disable friendly)
Meals as per full board program
Transport by minivan (up to 5 seats to comfortably accommodate chair and wheel)
English speaking escort guide
Travel kit (backpack, photographic volumes, clothes / trolley – second practice amount)
For citizens of the European Community only: Insurance for medical assistance (up to € 15,000), medical repatriation and damage to luggage (up to € 1,000), with the possibility of integration
Intercontinental flights (subject to reconfirmation) from/to Italy (or fee deduction in case you’ll buy tickets by yourself)

The fee does not include