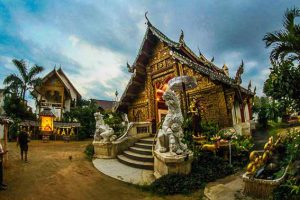 This program will start to visit Bangkok and cities around Bangkok.
Monuments like Grand Palace, Wat Trimit, Ayutthaya old town, Damnoen Saduak Floating Market,elephant show at Sampran Ground Zoo will be included. As a dinner cruise along the Banngkok river.
Then you will see Thai lifestyle on the way. On the way stay 2 nights at Phitsanulok then continue to Northen of Thailand to visit Chiang Mai & Chiang Rai. After finish fly back to Bangkok by domestic flight.

Phitsanulok
Phitsanulok is located about 377 km north of Bangkok. Phitsanulok is an important and historic city in lower northern Thailand and is the capital of Phitsanulok Province, which stretches all the way to the Laos border. The eastern part of the city has some forest areas

Chiang Mai
Chiang Mai is a towns in mountainous northern Thailand. It’s Old City area still retains vestiges of walls and moats from its history as a cultural and religious center. It’s also home to hundreds of elaborate Buddhist temples

Chiang Rai
Chiang Rai city is near the borders of Laos and Myanmar (formerly Burma). Wat Phra Kaew is a royal temple that once housed the jade Emerald Buddha and now displays a replica. Nearby, the Navel City Pillar is a monument made of more than 100 Khmer-style pillars. Mae Fah Luang Art and Cultural Park is a museum showcasing Lanna artifacts.

These and other attractions are in our “Around Thailand accessible tour ”

Day 2 BANGKOK
– Amazing at Grand Palace or Wat Pho
The Grand Palace is a complex of buildings at the heart of Bangkok, Thailand. The palace has been the official residence of the Kings of Siam since 1782
– Lunch at Baiyoke Sky see Bangkok 360°
– Wat Trimit (Golden Budha)
This historic temple features a gilded exterior, exhibitions & a massive golden statue of Buddha, with a weight of 5.5 tons (5,500 kilograms)
– Dinner Cruise at Cho Phraya river.
The best way to experience the glory of the Chao Phraya River is by taking a dinner river cruise. The luxurious floating restaurants will take you along to appreciate the romantic views of the famous landmarks such as the Temple of Dawn and the Grand Palace as well as people’s houses on both sides of the river glistening in contrast with the dark sky. On board, a wide array of culinary delights will be served, mostly accompanied by music and impressive shows. 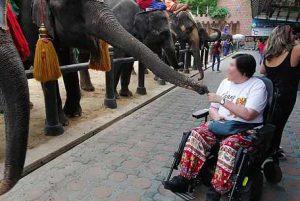 Day 3 BANGKOK
– Floating Market
Damnoen Saduak is the most popular floating market in Thailand, great for photo opportunities, food, and for giving you an insight into a bygone way of life
– Samphran Elephant Ground & Zoo
The elephants are the featured stars in the show, where they perform dances, play soccer, and fight battles like the “Yutha Hathi.” Yutha Hathi is a great historical royal battle scene which the elephants are utilized during the fight. As for thew resting show, the master crocodile catcher performs breath-taking stunts with the crocodiles that you cannot believe your eyes
– Icon Siam & SookSiam
An open space for the wondrous, SOOKSIAM is where the four regions of Thailand showcase their cultural heritages such as culinary, art, handicraft, medicine, performing art, play and all kinds of local wisdom. The venue integrates over 3,000 distinctively famous local businesses from all over Thailand in marvelous settings which represent the unique charms of each subculture. This is the new unified cultural spot where tourists can truly immerse themselves in the true

Day 4 BANGKOK – AYUTTHAYA – PHITSANULOK
– Wat Yai Chai Mongkol
Wat Yai Chai Mongkol (or Mongkhon) is located a few kilometers southeast of Ayutthaya (island). You’ll have to cross the Pridithamrong bridge out of the city. It obviously is one of the major temples in the Ayutthaya area, and both tourists and local worshippers visit the wat.
– Wat Mahathat
Wat Maha That or the Monastery of the great relic is located on the city island in the central part of Ayutthaya. Surrounded by canals and moats. The structure has been registered as a national historic site by the Fine Arts Department on 8 March 1935 and is part of the Ayutthaya World Heritage Historical Park.
– Evening arrive at Phitsanulok and Check-in to Hotel

Day 5 PHITSANULOK
-Wat Phra Si Rattana Mahathat Phitsanulok
Wat Phra Sri or Wat Yai as people called house Phra Buddhachinnaraij, Thailand’s most beautiful image of Buddha. To pay homage to the Buddha image, the annual
ceremony is held from the 6th 12th days of the 3rd lunar month. Apart from Phra Buddhachinnaraj, Phra Attharot stands behind the Vihar of Phra Buddhachinnaraj. And behind Phra Attharot is erected the Ayudhya-style pagoda or Phra Prang.
– Sukhothai Historical Park
The Sukhothai Historical Park covers the ruins of Sukhothai, the capital of the Sukhothai kingdom in the 13th and 14thcenturies, in what is now the north of Thailand. It is located near the modern city of Sukhothai, the capital of the province with the same name. 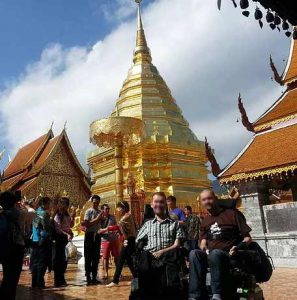 – Doi Suthep (temple on the mountain)
Doi Suthep is a constant part of life in Chiang Mai. A Thai saying goes, “If you haven’t tasted Khao Soi or seen the view from Doi Suthep, you haven’t been to Chiang Mai.” This regal mountain overlooks the city from the northwest, providing commanding views from its summit. Aside from its dominating presence on the horizon.
– Royal Park Rajapruek
The park size is more than 800,000 Square Metres. Collecting varieties of plants from all around the world which are divided into garden sections. Each section shows beautiful plants with divisibly landscape architecture. Our Sections are Thai gardens, Corporate gardens, and International gardens. Lanna architecture The magnificent striking and elegant as possible. Created to celebrate the His Majesty the King King was a genius and he covered the Throne, the longest in the world under the theme “The King is the heart and soul of the people of Thailand
– Welcome Dinner “Khantoke”
Experience Lanna dining with “Khantoke” or “Toke”, around rattan tray, serving various kinds of authentic northern Thai dishes and national Thai food. As you enjoy the tasty food, you will be entertained by spectacular and fabulous classical dances from northern Thailand and from around the nation

Day 8 CHIANG MAI
– Elephant at work (Elephant ride are optional)
Explore Mae Sa’s Elephant Camp and its exotic Orchid and Butterfly Farm on this half-day tour from Chiang Mai. After witnessing the elephants perform and demonstrate their work, take a leisurely stroll through the thousands of colorful orchids and the many butterflies fluttering around you.
– Mae Rim Snake Farm
Mae Rim Snake Farm Chiang Mai is situated on the Mae Rim to Samoeng Road. This farm is the largest snake farm in the region. It attracts the maximum number of crowd as compared to all other Chiang Mai Parks & Gardens. Mae Rim Snake Farm, Chiang Mai has a large collection of snakes. Snake handlers show the general public all kinds of snakes in the farm. Some snakes are nonpoisonous but most snakes here are poisonous. The main highlight of the park is the poisonous Cobra.
– Chiang Mai Monkey Centre
Each hour a 30 minutes show begins where the monkeys demonstrate an impressive range of talents such as coconut-picking, bike-riding, basketball and arithmetic. Audience members, especially the youngsters, are encouraged to join in the fun – a good example of this being where people are asked to challenge our clever friends’ number skills

Day 9 CHIANG MAI
– Home industries
Of all Chiang Mai’s cultural achievements, none are more remarkable than their handicrafts. Chiang Mai is, quite simply, Thailand’s major center for quality handicrafts. The artisans produce an extraordinary range of quality products which are invariably the first choice among shoppers, silverware, lacquerware, silk and cotton products, ceramics, parasols, and jewelry.
– Sankampaeng hot spring
Sankampang Hot Springs in Chiang Mai hosts a spectacular lush green park spread over an area of 40-acre. The park has been beautifully landscaped and it has a vast range of beautiful flowers. Sankampang Hot Springs
– Chiang Mai Walking Street

Day 11 CHIANG MAI
– Check out from Hotel. Heading to Chiang Rai, Sight Seeing on the way
– Check in to Hotel in Chiang Rai
– Chiang Rai Walking street
Chiang Rai also has a couple of good ones. In content they are very similar: clothing, hill-tribe chic, the ubiquitous carved soap and candles, plenty of food and drink stalls and general bric-a-brac although even if you have visited the larger, big city ones, provincial Chiang Rai’s versions are less hectic and crowded, with a more relaxed atmosphere and well worth taking in as well.

Day 12 CHIANG RAI
-Wat Rong Khun (White temple)
Believe it or not, this is a real place – Wat Rong Khun, better known as the White Temple, is a Buddhist temple in Thailand that looks like it was placed on earth by a god. Though it may have involved divine inspiration, it was in fact designed by a man. Chalermchai Kositpipat, a Thai artist, designed the temple in 1997.
– Huay Pla Kang Temple
Wat Huay Pla Kang is a Chinese styled (Mahayana Buddhist) temple in the northern outskirts of Chiang Rai city. The compound is dominated by a statue of Guan Yin, the Goddess of Mercy, and an impressive 9-level pagoda.
Baan Dam Museum
“Chaing Rai” abound city with artwork from various artists, various guidelines, and various emotions. At this Black House, Acharn (Teacher) Thawan Duchanee has devoted his energies spent over 25 years building up this huge Folk Art Museum and art exhibitions which be valuable and unique in a vast area of over 100 acres of Black House. 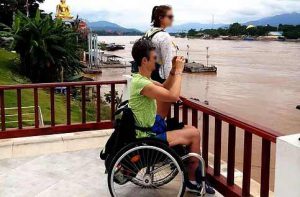 Day 13 CHIANG RAI
– Doi Tung Royal Villa (Mae Fa Luang)
Doi Tung Royal Villa, Chiang Rai province, was the former residence of HRH Princess Srinagarindra, the Princess Mother. This was also the base for her work with the Doi Tung Development Project, which she founded to reforest the land and helped to improve the lives of the local ethnic minorities who had previously relied on slash and burn farming, opium poppy cultivation, and the drugs trade.
– Golden Tri-angle
Lush jungle, mist-shrouded mountains, hill-tribe villages and tranquil views of rice paddies mark the Golden Triangle, the point in northern Thailand that converges with Laos and Burma where the Ruak and mighty Mekong rivers join.
– Maesai market (Myanmar border)
Take a step from the well-beaten track and explore one of Thailand’s hidden gems, the fascinating Northern city of Mae Sai; a significant trading city on the Thai-Burmese border. We begin our adventure by visiting the local market; a glorious insight into the trading heritage of this location, and also the perfect place to purchase cheap jewels, imported from neighboring Burma, fascinating items from China, and all manner of delicious local foods.

For information, details, frates about “Around Thailand accessible tour” please write to info@accessibleasia.com

Manage cookies consent
We use cookies for technical purposes and also for other purposes ("choice of site language", "statistics").